On Thursday 15th February, 400 professionals came together for the sell out pro-manchester Corporate Finance lunch at The Midland Hotel.

John Ashcroft, CEO of pro-manchester, opened the event, which has become an important annual fixture in Manchester’s calendar. The North West and Manchester Corporate Finance Review, produced by Experian for the event, was circulated to attendees in advance and gave a flavour of the topics to be addressed by the two panels. Ashcroft thanked Investec Private Bank for sponsoring the event and welcomed the first panel. 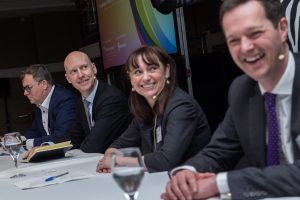 The first discussion addressed the issue we are all talking about, even if we wish we weren’t: the impact of Brexit. Oliver Tebbutt, Deloitte, appreciates there is a lot of large corporate pessimism but noted that this is less of a driving factor for the lower and mid markets. The foreign investment market was consistent throughout 2017 and we are still seeing lots of overseas trade investors.

Rebecca Rennison, PwC, recognised we all have the shadow of Brexit looming over us but sees this as an opportunity. The one thing businesses cannot do in a changing landscape is to stay still. Companies therefore are starting to review plans, develop new strategies and consider their options to become “Brexit ready”.

There does appear to a difference between the North’s ‘get up and at it’ attitude compared to the South, according to Mark Clephan, EY. A common thread he has seen is the desire to get deals done before the six-month countdown to Brexit starts in October. This was echoed by Jonathan Boyers, KPMG, who is seeing a desire to get things done sooner rather than later in the face of uncertainty.

The panellists were asked to share their favourite deals of 2017 – a hard choice to make given the buoyancy of the market last year. Boyers kicked off with the acquisition of Utiligroup by a US PE firm, which saw 18x earnings and a deal value in excess of £100m.

Clephan chose a smaller deal: finding a solvent home for a US owned, struggling company (with five years of consecutive losses, pension holes and 500 employees). The deal was made possible by a large dowry from the US corporate, showing the importance of doing the right thing and real heart-warming moment in the world of corporate finance!

For Rennison, the stand out deal of 2017 was the acquisition of family owned, Stockport based Lundy Projects by the Swiss group, Alpiq, to enable further growth. The deal, as well as being highly beneficial to both companies, shows the appetite for European companies to enter the UK market. Tebutt chose the Chase disposal, as a classic example of a strategic exit getting the best result for the shareholders.

Next, the panellists considered the changing structure of deals with some interesting themes emerging. All agreed the high mulitples being seen in the market – Rennison stated there has been 1.7% increase in these multiple from 2016 to 2017 – are driven by PE, and the competition for emerging businesses. Debt finance is available, with the big four actively looking to lend and being pushed to new methods, but this is predominantly at the top of the market with less impact at the lower end.

Further options are available at the early stages, according to Tebutt, as corporates are looking to spread investment over new, predominantly tech-based businesses. The key question being asked is: how can this business be scaled in the next 5 years? This is making the UK, and particular Manchester, an exciting place to be for entrepreneurs. Boyers added a note of caution for investors, stating we are likely to be a pricing peak and investors should not assume the multiples at exit will be the same as we are currently seeing at entry.

Government lead funds are adding to the variety of options open to growing businesses, alongside debt refinancing and IPOs. Rennison believes the window for IPOs is starting to close but that it could still be the best option for the right business. Clephan agreed, saying that whilst we should be proud that Manchester is the second best city in Europe for PE, companies should prepare for a number of financing options. Boyers added that it is about finding the right capital for the right deal, and that Manchester is developing access to further sources of capital.

To close, the panellists were asked to make their predictions for 2018 and, by and large, these were positive. Rennison and Boyers expect to see a push to get deals through in the first half of the year, with Tebutt agreeing the challenge will be to keep deal volume high in the final quarter of 2018. Whilst Clephan noted there are no elections or large votes planned for 2018, Rennison has not ruled out a change in Government. 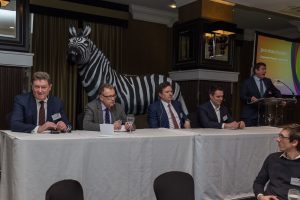 After lunch, Ashcroft welcomed the second panel of the day and asked Jonathan Diggines, Mercia Technologies, to discuss the North West’s only unicorn: Blue Prism. Mercia originally invested in Blue Prism through the Rising Stars Growth Fund, and has seen a return of 77x cash investment.

Again, the panellists shared their best deals of 2017 and the ones they wished they had been involved in. Utiligroup got another mention from James Hales, NorthEdge, who represented the buy-out team and worked with KPMG to secure a range of great options.

David Hall, YFM Equity Partners, commented on the difference between UK and US markets. The US is much keener to invest in companies with a slower route to profits, and are prepared to take risks to get the market share and growth. Hall wants to see investors looking to create a company of consequence: a major player in the marketplace and one that is becoming a better corporate citizen.

There is an interesting balance between PE and Government lead funding. Diggines is leading the Northern Powerhouse Investment Fund but recognises there is a risk of stifling growth in the other areas. Hall commented that Government funding tends to be aimed at the start-up businesses looking for up to £2m. There is a need to attract PE into the next stage of funding, from £5m to £25m, to support further growth. He contrasted the Manchester finance market with that of Scotland. The size is similar and yet Scotland has more unicorns. The difference, he argues, is those entrepreneurs are ploughing money and expertise back into the market.

Finance is also available through large corporates, with companies like Boots and Unilever developing their own investment funds. Dan Sheahan, Investec Private Bank, noted there are challenges here but it can be good option for the right business. He echoed the advice that companies should prepare for a range of finance options, running the processes in parallel, until a choice needs to made.

All panellists, as you would expect, emphasised the importance of getting high quality advice – on investment, tax and legal issues – to navigate the market. Sheahan and Hall both noted that this is more challenging at the lower end of the market and that, as an industry, more signposting is needed for entrepreneurs and new businesses.

Trends for the year ahead

The final question saw the panellists discussing trends for the year ahead. Hales expects the high level multiples to be maintained, funding the next level of growth. Sheahan stated it was a seller’s market, backed by Hall’s predication that 2018 will be the best vintage for investors. Diggines is hoping to see the big four accountants get more involved in the SME market.

Ashcroft closed the event, once again thanking everyone for attending and looking forward to a very busy year ahead.