On a lovely sunny afternoon, Laurie Mentiplay (Associate Director at WSP) guided a small group of pro-manchester members and guests on a historic walking tour of Manchester city centre. The aim was to show where Manchester began and how the impact developments here have shaped national and international infrastructure. 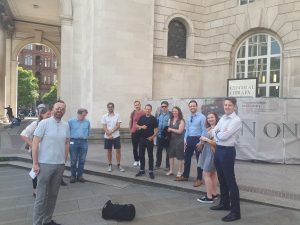 Outside the beautiful central Library, Laurie gave a brief history of the city. Founded in AD79 as a Roman service station, Manchester later became a successful market town, a key manufacturer of cotton (leading to the nickname Cottonopolis) and the home of the Industrial Revolution.  No overview of Manchester’s history is complete without mention of the suffragette movement and our first stop was at the new Emmeline Pankhurst statue. 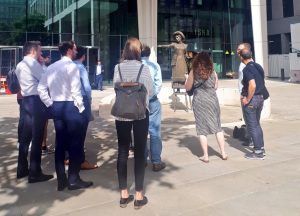 Next stop, Manchester Central Station opened in 1877 and operated until 1969. It has had several uses since and is now a popular exhibition centre. The historical importance of the site doesn’t stop there though, as the new Peterloo Memorial by Jeremy Deller is under construction.  It is planned to be completed in time to commemorate the 200-year anniversary on 16th August.

Returning to the transport focus, we arrived at our first of three canals. These waterways were at the heart of the development of industrial Manchester, delivering coal and raw materials to the city centre.  The Manchester Ship Canal (1887-1893) enabled the city to become the third busiest seaport in England.

Continuing our walk to Rochdale Canal, Laurie explained that a group of 48 men from Rochdale raised £237 and commissioned James Brindley to do a survey of possible routes. It was opened in 1804 and was the first canal link across the Pennines, ending at Sowerby Bridge. It is 32 miles long with 92 locks and was reopened in 2002 with funding from the Canal and Rivers Trust.

Stopping at Deansgate Castlefield, the group reminisced over (blurry!) memories at the infamous Hacienda Nightclub. From this vantage point, Laurie drew our attention to the architect-lead tram stop and the repurposed viaduct to Central Station. Like other tram stops, it is both a transport hub and catalyst for development. In the immediate vicinity there are numerous new buildings under construction including three apartment blocks between 29 and 40 storeys high. These will be dwarfed however by the developments at Deansgate Square which include the fifth highest building in the UK (at 67 storeys). 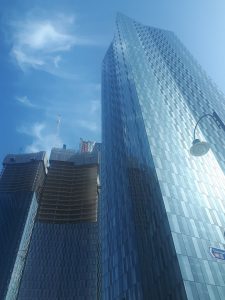 Moving on to the Bridgewater Canal Basin, we learned that this was the first modern canal in Britain. The Castlefield terminus completed in 1765 and was an incredibly important hub in the Industrial Revolution. Francis Egerton, Duke of Bridgewater, owned collieries at Worsley 7 miles away and the canal was built to transfer coal to power textile mills. Crossing the bridge, Laurie pointed out the Grocer’s Warehouse and the Pete Waterman Recording Studio where many of Stock Aitken and Waterman’s biggest hits were recorded in the 1980s, including Rick Astley’s Never Gonna Give You Up.

Castlefield is Manchester’s most historic site and contains a range of iconic structures including canals, warehouses and four massive viaducts. It fell into ruin but has been redeveloped through a series of schemes in the 1980s and became the first Urban Heritage Park. Looking around it is easy to see the scale of regeneration, with every disused building and open space the subject of planning requests and construction.

Walking under the layered viaducts, Laurie talked us through the planning and development of the recently opened Ordsall Chord (2018). This new elevated railway connects Manchester’s three main stations and the Airport for the first time. It is the worlds’ first asymmetrical network arch bridge and ties into the historic railway viaducts on either side.

From the new to the very old, our next stop was the reconstructed Roman fort which was in use from AD79 to AD410. It holds a strategic location by the rivers Irwell and Medlock. Today, the area is better known for the outdoor arena which operates each July.

Moving from water to rail, we next stop at the world’s first passenger railway house at the edge of the Science + Industry Museum. The row of buildings includes the Stationmasters House (1808) (Grade 1), Station Building (Grade I) (1830) and Commercial Hotel (Grade II) (1833). The separation of passenger classes can be seen on the door entrances.  In 1844, Hunts Bank station opened (Victoria) and this became freight until 1975.

As always, our transport and infrastructure walk ended with the chance to socialise over a few drinks and nibbles. Huge thanks to the lovely people at Masons Bar, Manchester Hall, for hosting us.